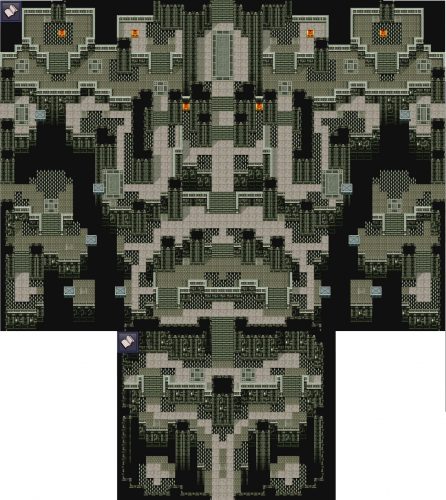 Note: Make use of ‘Safe Pain’ or ‘Safety Boots’ again to walk over the spikes unharmed.

Follow the path east or west to the next screen.

Make your way to the silver platform in the southwest by going north first and then west. Use the two platforms to get across and then follow the path to the next screen in the west.

Use the hidden path in the southeast corner to get to the treasure.

Then follow the path west first, and then north till you reach two platforms. Take the one in the west, and enter the room in the north to get a treasure.

Take the platform leading south. There’s a hidden pathway in the wall here that leads to the treasure in the southwest corner.

Take the platform in the south, then walk north to the two platforms again. Take the one to the east this time and go back to the main hall. 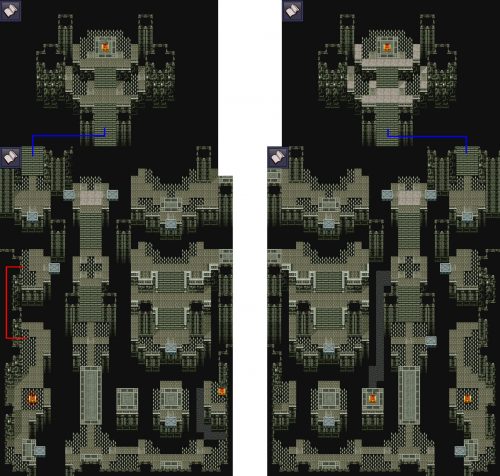 Collect the two treasures and then take the platform you passed before.

Also take the platform just south, and then walk to the east side of the room and take the two platforms in the southeast to get across.

Go on to the next screen.

Follow the path north, and take the first platform you pass to the east. Get the treasure and take another platform in the south.

Go north till you reach the cross shaped spike field. There’s a hidden pathway to the west that leads to a treasure.

Go further north and use the platform to the east, and enter the room in the north for another treasure.

Take the two platforms to get back to the cross shaped spike field. Go north again and take the platform to the west this time.

Exit the screen in the northwest.

Use the platform and like on the other side of the main hall, collect the two treasures in the north.

Use the two platforms in the south to get back to the center of the main hall.

Walk north on the center hallway and collect the two treasures to the east and west.

Before you go further north, heal your party for the upcoming boss battle.

Since you don’t have any treasures to buff and heal your team, this battle can be a bit more difficult.

Buff your team with All Guard and All Resist to reduce the incoming damage.

Both enemies will regularly use AoE attacks each dealing 40-90 damage. One member should always be healing while the others deal damage.

Focus on Lauren first and wear him down with Rapid Slice and Heavy Crush for example.

Also steal the Crystal of Protection and the Magic Crystal of Power from Lauren and Asty respectively.

After the boss battle, enter the next room in the north.

There’s a small alley just a bit to the northeast of the entrance. Follow it to get a treasure. Go back and walk east past the stairs and collect the treasure in the north. Backtrack to the entrance and go west this time to get another treasure.

Heal your party and enter the throne room.

After a conversation you have to fight the Emperor again. This time you can beat him.

This is one of the hardest fights so far.

All enemies have strong AoE attacks, after which you have to heal instantly before the next damage wave wipes your team out. First, protect your team with All Guard and All Resist then buff them with All Power.

Focus on the Emperor, and use Rapid Slice and Heavy Crush or other strong single target attacks to attack him. One member has to heal your team with All Cure constantly to keep the HP over 70%.

If you have Milka or Oreana in your team use Shadow Flare to inflict heavy damage (around 300).

Once the Emperor is down, things get a little easier and you should be able to defeat the 2 Guardians without greater problems. Just always focus on one enemy at a time.

If you get the chance steal the Crystal of Power from the Emperor.

After the battle and another conversation, you will get all treasures back including the Treasure of Darkness which wasn’t in your possession before.

Back at the Imperial Town, go east and to the next screen and talk to the Shipbuilder. Since the rule of the Emperor is over he has time to enhance your ship instead. You are now able to sail over reefs.

Your next destination is Syde Village in the northeast of the world map. The fastest way to reach it is to sail west from Harva Town till you reach the island, and then follow the river to the center of the island where you can go on land. The village is just a bit to the west.