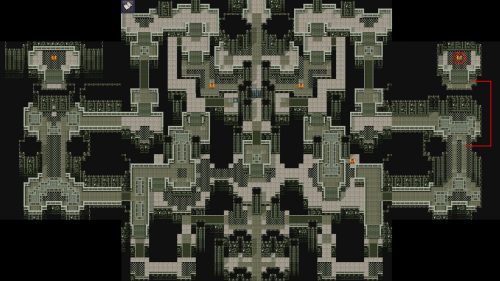 Note: A great part of this dungeon is covered with spikes.

Most of the time you can avoid them but there are a few instances (especially if you want to get all treasures) where you have to walk right over them.

That’s where your Safety Boots come into play. They will allow you to walk over the spikes unharmed for a period of time.

Start by walking north and then east around the pillars while carefully avoiding the spikes. Follow the path to the next screen.

Before you walk north, activate your Safety Boots.

There is an invisible hole in the wall to the right half way up the path which leads to the separate room with a treasure in the north (check the map for details). Backtrack to where you went into the wall and leave this screen in the northwest.

Follow the path north and west and then go down both stairs to get to the next treasure.

Take the first set of stairs up again, then go east and follow the path all way to the south. Collect the treasure at the end of the path just east from where you came down.

Now go all the way west over a large field of spikes. Ignore the path leading north in the middle for now.

Go up the stairs and head west again to get on the next screen.

Follow the path north, and enter the room there with the pirates’ key to get another treasure. Go back and leave the screen, this time in the northeast corner.

Now walk north and follow the path. Go down both set of stairs to reach yet another treasure.

You can already see the switch which opens the gate in the middle from here. So, backtrack up the first set of stairs and follow the path south again, and then east where you press the switch.

After activating the switch, go further south and over the large spike-field again. But this time, take the path leading north in the middle to leave this screen.

Activate the Porter and check your HP/MP before you walk further north. Once you do, you’ll initiate the next boss battle. Although boss battle might be a bit overdramatic.. but still no ordinary battle 😉

They have relatively low MDF, so use magic if you can. Especially because the Prison Guard is weak against every element except for fire.

Take down the Prison Guard first. If it uses Barrage get ready to heal your party. And if it triggers Revenge it will most likely one-hit one of your team members in the next round. Otherwise it should be an easy fight.

Make sure to steal the ‘Crystal of Life’ from the Prison Guard.

Heal your party, then follow the two guards to the next screen. Talk to the prisoner in the first room, and he will give you an info which you can use later in the game.

Free the chief of the pirates and attempt to leave. Unfortunately, you will be engaged by another enemy.

Just throw the strongest skills you have at him and heal once in a while if needed, and he should fall quickly.

Steal the ‘Crystal of Fortune’ before you kill him.

You will be transported to the Pirates’ Hideout. Dingo joins your team and you can use his ship now.

Teleport to the Port Town of Nex, leave the town, and board the ship. Sail northeast to reach you next destination – Prose Village.