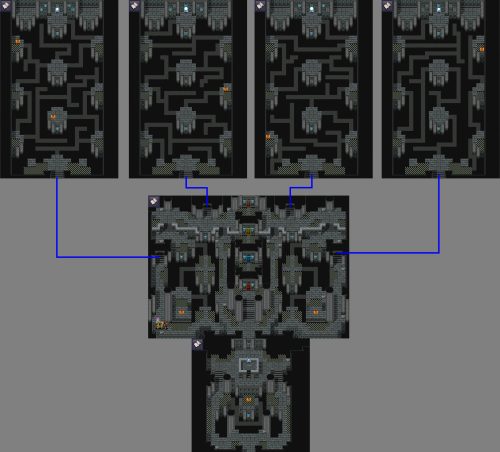 Note: Make use of ‘Safe Pain’ or Safety Boots again to walk over the spikes unharmed. A great part of the dungeon revolves around hidden pathways.

Depending on your overall screen settings (brightness, contrast) you will be able to see them a little. Otherwise the mini map will help a great deal.

You can also check the map on this page if you’re stuck.

All hidden paths are shown in a dark-grey texture.

Take the path around to the west. There’s a hidden path leading to the treasure on the pillar in the center.

Then activate the switch in the little podium using the ‘Treasure of Light’ and enter the main hall. 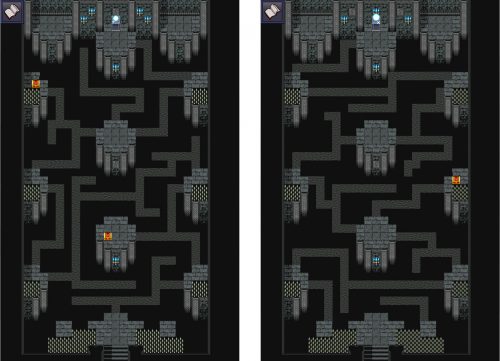 Go west immediately and follow the path north. Take the stairs in the north to the next screen.

Take the hidden path in the west and work your way to the treasure in the northeast.

Make your way to the cross-shaped pillar in the Main Hall, then go west to get the treasure there. Then continue on this path till you reach the stairs to the next screen (which will be the one with the Fire Switch).

Then go east from the pillar to reach the platform with the switch to open the fire-door.

Backtrack all the way to the entrance of the main hall. 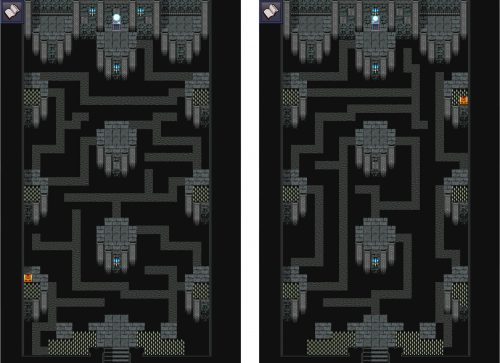 From the Main Hall entrance, this time go east, and then north, and take the stairs to the next screen.

Take the hidden path in the southwest first to get a treasure.

Then take the path to the east of the entrance and make your way to the switch in the far north. It will open the earth-door.

Leave the room and go back to the main hall.

Like on the west side of the main hall, some hidden paths lead to a treasure first and then to stairs to the last room with a switch.

First, take the path in the southeast that leads all the way up north to a treasure. At the entrance again, take the path directly north and make your way to the switch again.

Activate it to open the water-door, then go back to the main hall.

You can now take the center path in the main hall to get to the next screen.

Heal your party, then proceed further north. Unfortunately, the treasure is not here anymore.

While you still can’t believe your eyes, Lauren enters from behind and apparently already has the treasure.

Now this is interesting, since you had to use all five treasures to even be able to get to this room, and Lauren could just steal it without any of the treasures in his possession?

That doesn’t seem to bother any of the characters, and so another boss battle is the results after another fruitless conversation.

This is not a really tough fight; just look out for Lauren’s Heavy Crush attack that can kill one of your team.

Also, steal the Crystal of Power from Lauren.

After the conversation, the Emperor challenges you without a break to heal. But since you can’t win this battle it doesn’t matter.

After you gain control again, teleport your team to Harva Town.

Board the ship, sail south past the island where you challenged the Lemming Hero. Then sail east till it opens up north, where you follow the river to the center of the island. Go on land and head for the Imperial Castle Town in the southeast.