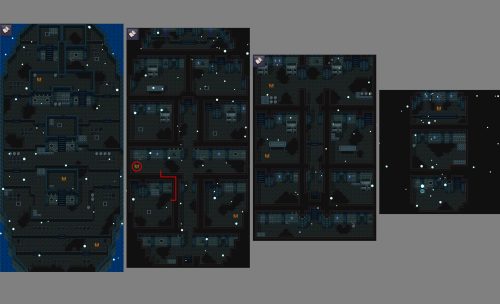 Note: It’s pretty hard to find one’s way at first because there are many doors and stairs that eventually lead to the same point again and all the cabins look similar.

So if you don’t know where you are going, you could be running in circles for some time.

With that said, walk west past the stairs, go south and collect the first treasure here.

Then follow the path to the east and take the stairs down leading to the lower deck. (The stairs are really small, only one square wide, and kind of difficult to spot at first.)

Just collect the treasure here then go up to the main deck again.

Now go further south, and collect the treasure in the southeast corner. Go back up a bit, and as soon as you can, walk west to the stairs to get down on the 2nd deck.

There’s a hidden path in the wall to the east that leads to a treasure. Collect it, then return through the hidden path, and go down on the 3rd deck. Enter the next room and take the treasure.

Follow the path and collect the treasure on the podium, and follow the path further and take the path leading north at the intersection. Take the stairs to the 2nd deck. Take another stairs here to the 3rd deck.

Collect the treasure in the room to the west, then take the path leading south to the 4th deck.

Activate the Porter and heal your team. Enter the next room to trigger the next boss battle.

They are all weak to earth so use Earthquake with your main character.

If you have team members in the back row with low HP then Mow Down from the Kraken may be a problem.

Also the Kraken will use Blackout regularly so you have to cure it to effectively use physical attacks. Just make sure to heal regularly.

Before you kill the Kraken steal the Crystal of Protection from it.

After the battle, go to the next room and collect the Treasure of Water. You'll automatically travel back to Prose Village and deliver the contents of the treasure chest to Oreana, who will then ask to join your party.

With the whirlpool gone you can now sail further west to the island marked on the world map. Sail there and enter the town on the island – Harva Town.