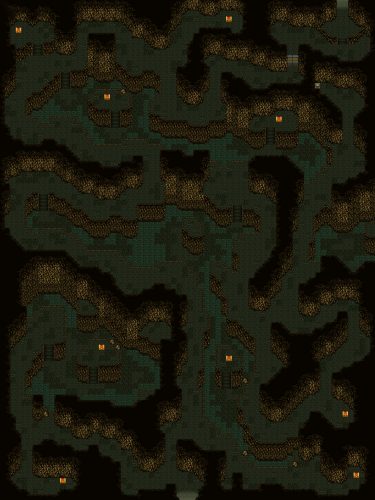 Note: Since you will collect all treasures in this run through the dungeon it will make your second visit much briefer.

If you are still under Lvl 16 then I recommend to level up your team; otherwise the battles could be quite frustrating with much healing involved.

Make sure you enter the cave by day. If you don't want to collect all treasures, then you can jump directly to the Airberries run title on this page.

From the entrance, head west and collect the treasure in the southwest corner. Then go north down the stairs and to the little plateau to get the next treasure.

When you reach a set of stairs, take them and go southeast till you reach another plateau with a treasure.

From there, head north, and east up the stairs. Follow the path all the way south (ignore the first intersection), and then east to reach a treasure.

Go down the stairs, walk west, and up the stairs again.

Follow the path west, eventually leading to the northwest corner of the dungeon. Take the treasure there on the plateau, then go down both stairs to the lower level.

Take the treasure here, then walk further east for another treasure on a plateau. Backtrack west to where you came down the stairs. Follow the path east, then take the north path at the intersection to get the last treasure in this dungeon.

Unfortunately, you won’t be able to collect the berries because it's still daytime. So, after you get the last treasure, teleport back to Prose Village and sleep at the Inn till midnight.

(Note: there's no Porter in Tyde Cave, so you'll either have to use a Transfer Stone, or walk back to the entrance of the cave, and then walk across the World Map back to Prose Village.)

Leave the town and head to the Tyde Cave, again making sure it's still night before you enter the cave.

You will see that the cave is now partly filled with water, which makes some treasures inaccessible now. Just follow the path north and stay on it till you reach the exit again.

Now you can collect the berries which allow you to breathe underwater.

Teleport to Prose Village and make your preparations before you leave town. Board the ship, and sail northwest to your next destination.