Requirement: The Haunted Treasure from the Pirates Hideout, reached level 57 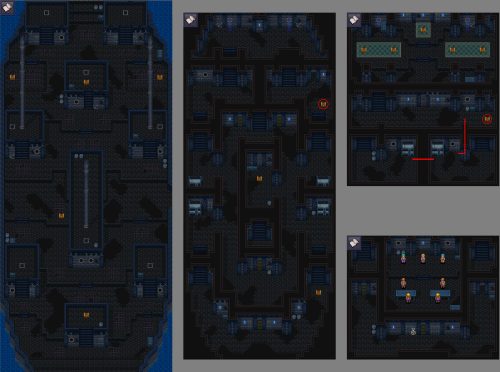 Note: This dungeon has some of the best treasures that can be found so it’s really worth to check this one out. To enter the ship easily i recommend to switch controll settings to touch mode. Then just tap on the ship and you should be able to enter the dungeon. In the cursor mode you have to constantly hit the action button while sailing into the ghost ship to enter.

Follow the path to the west side of the ship and collect the treasure there.

Follow the corridor and go through both doors leading north, until you reach the stairs in the middle of the deck, leading to the upper deck. The man in the north will give you important information about a riddle you have to solve in a moment.

Go back down and take the stairs in the west, just opposite of the stairs you first came down. On this deck there won’t be any random encounters, which makes solving the riddle ahead less frustrating because there are no interruptions.

Getting the right key

If you want to solve the riddle by yourself then don’t read further because I will write down the solution below.

This means that the girl on the right has the silver key that opens the door to the treasure vault.

After you got the key, leave the deck using the stairs in the northeast corner. Follow the path to the next stairs and collect the treasure on the way.

Head for the central podium and collect the treasure, and then use the stairs right next to it. Go through the door to the left and use the stairs in the west first (the ones that lead down to the third deck).

Follow the path to the next stairs. You are finally standing before the treasure vault. Open it and collect the five treasures.

You have done everything here so leave the dungeon using teleport and make use of the found treasures.