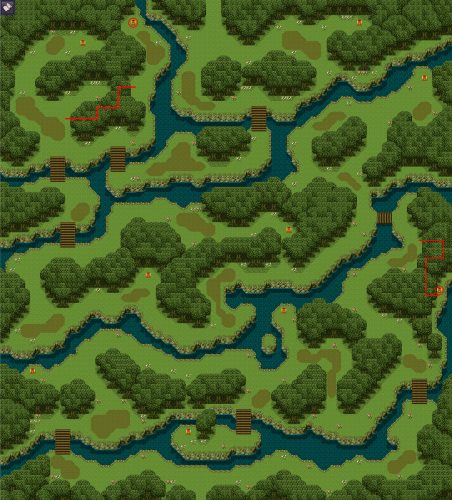 Note: It’s important that you enter the forest by day!

You can reach the Moon Forest with the bird Olnis which Mave gave to you. You can call him if you select the Heaven’s Wing in the Key Item inventory.

The Moon Forest is located northeast of the Imperial Castle Town and is completely surrounded by mountains.

Once you entered the forest take a left immediately and follow the path. After you cross the bridge, you should see a treasure in the northwest.

Grab it, then follow the path east till you reach an intersection. Go south first and collect the treasure. Go back and grab another treasure in the north.

Now follow the path further southeast, and then north. Ignore the bridge leading south and go north instead.

Before you cross another bridge in the north, there is a hidden passage to the east that leads to a treasure. After grabbing the treasure, cross the bridge and go all the way north to another treasure.

Now go south again, past the bridge you just crossed over, and follow the path. Collect the treasure on the way and continue west till you reach the west border of the map (opposite a treasure chest you opened earlier).

Now go north and east, ignoring the bridge for now. There is a treasure far east. Grab it, then go back and cross the bridge leading north.

Cross the next bridge, and go further north and collect the treasure. There is another hidden passage in the woods a bit to the south that leads to the treasure in the north you saw before. Take it, then take the eastern bridge leading south and follow the path.

Now leave the map in the north and heal your party and replenish your MP. There’s no Porter here so you can’t go to town to replenish HP/MP. Talk to Lemming X in the north to initiate a boss battle.

Strategy hint: I suggest equipping the Treasure of Fire to your main hero and charge it before encountering the Lemming X. If it's fully charged it's attack 'Cremate' will do about 1000 damage to the Lemming X (which equals 16% of his health), so it's a nice start for the battle to make the already hard fight a bit easier.

You should have one Ultimate Save by now. Equip it to your healer so he can constantly heal and cure others from abnormal states. Lemming X has some strong attacks and also Lemming Blast hits a row with high damage. All attacks are of physical nature so ‘Will Guard’ or ‘All Guard’ will provide some protection.

The two Sand Lemmings have a nasty attack (Curse Scream) that can inflict various status effects and damages the whole party. It’s the most troublesome attack because it can render all but your healer unable to move.

Use Light Bringer with your main hero to inflict decent damage. If you can use treasure attacks then use the Treasure of Fire to inflict roughly 1000 damage to the Lemming X.

Focus on Lemming X first because he can inflict the most damage. If you have Grieg in your team then use Heracles Blow. If you have other team members then use their respective strongest single target attacks. After the Lemming X is dead, the rest will be easy.