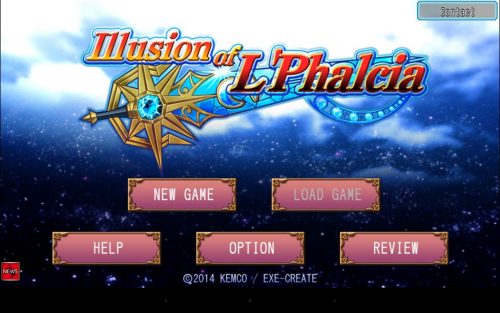 There are 2 reviews for 'Illusion of L’Phalcia'.

Developed by Exe-Create, Illusion of L’Phalcia is a traditional-style JRPG. There is a slight “Arabian Nights” theme to the character outfits, the music, and some dungeons that resemble Egyptian pyramids, but the setting as a whole is perhaps 5% “Arabian Nights” and 95% medieval fantasy. The setting is ten years after a war between three adversarial nations; all three nations are recovering from the devastation of the “Tri-War”.

L’Phalcia’s most standout features are its full-sized 3D battle graphics (the 3D character models aren’t blocky, big-headed “chibi” abominations) and its voice-acted cutscenes. Very few other Kemco RPGs have full-sized 3D battle graphics, notably Revenant Saga and Revenant Dogma. Voice acting in the vast majority of Kemco RPGs is limited to assorted battle cries, if it exists at all.

The 3D battle graphics are very well done for a budget-priced RPG. Character models are appealing to look at and well-animated. The monster models are a little simple and have a lot of palette swaps, but the monster animations are also well done.

The voice acting is entirely in Japanese (the game’s text has been skillfully translated into English, with quality localization). Not every cutscene is fully voiced, but virtually every dramatic or pivotal part of the story is. The voice acting is on the level of a subtitled anime; some performances are over-the-top because they portray maniacal (or at least, HIGHLY enthusiastic) characters, while other performances are more subdued and thoughtful.

The story of L’Phalcia isn’t exceptional – aside from a few moments, including certain scenes from Caldina’s past that provoked a strong emotional reaction in me personally. The plot starts off with a very lighthearted quest to find a legendary sword with the power to grant wishes.

The hero Ryser is a professional Seeker (an explorer who adheres to government regulations concerning discovered artefacts) who wants money; his partner Cougar is an intelligent leopard who wants to taste the best foods in the world. They ally with Tiana, a very sheltered young woman, and her personal bodyguard Ferio. Caldina, a former soldier, is the fifth and last person to join the quest.

The story is notable because it is NOT all about the hero; instead of focusing squarely on a single protagonist, L’Phalcia’s story is about the “deuteragonist” pair of both Ryser and Tiana.

At first the story is slow-paced, and the relationship between Ryser and Tiana – who start off as so hostile and argumentative that the other party members have to actively break up their constant bickering – is more interesting than the plot. Halfway through, the story improves dramatically, and stays compelling to the end. The second half of the story also features character development for all five party members rather than primarily focusing on two. It’s worth experiencing, even if the first half is lackluster.

The turn-based combat of L’Phalcia is recognizable to anyone who’s played an Exe-Create RPG before. As always, battle statistics are very important – but unlike many other Exe-Create games, Speed is toned down. Certain spells and skills have a cast time before taking effect, or a wait time after use, which limits how often a character can act even if their Speed is high.

High Speed does have an effect on who goes first and how many turns they get, but if one plays on Normal difficulty then Defense and Intelligence are also crucial for protection against physical and magical attacks, respectively. Strength and Intelligence also affect damage dealt with physical skills or spells, respectively. Spells and abilities that improve battle statistics, or reduce the battle statistics of enemies, play a crucial role in combat.

Perhaps the most unique aspect of L’Phalcia’s battle system is each character’s gem grid. Gemstones set in this grid enable the characters to level up their skill in white and black magic, and this is the ONLY way to learn spells or have them available to cast. (An especially powerful third type, “mix” magic”, is ONLY learned from leveling up both white and black magic.) Other gemstones have beneficial effects like regenerating hit points or magic points, powering up physical or magical attacks, or reducing damage taken. Gemstones can be rotated before being placed on the grid.

The gem grid is potentially so important that players may want to reconfigure the party’s gem grid before tough boss fights. Thankfully, L’Phalcia continues Exe-Create’s tradition of always warning the player when a boss fight is imminent.

L’Phalcia has twenty sidequests, ranging from trivial to surprisingly character-focused. L’Phalcia’s only other content beyond the main story is a variety of optional bosses scattered about the world. Each boss warns the player of the recommended level to fight it before engaging. Each boss yields points that can be spent on an in-game shop, although most of the shop’s contents are underwhelming. One can buy accessories that are somewhat stronger than what exists elsewhere in the game, but perhaps the most powerful shop items are simple “materia” that permanently increase character stats by 1-3 points each.

Optional bosses can be fought repeatedly for shop points (the amount awarded for defeating them is cut in half each subsequent attempt, down to a negligible minimum), or for their equipment drops (if they have any). The final optional boss is level 99 and exists only to challenge the most dedicated players.

The PS4 version offers paid DLC to power up the party or control the encounter rate. Paying for this DLC is completely unnecessary. Grinding to the maximum level is easy if one uses the tools available and fights “metal monsters” on a certain island. Cheap items that eliminate encounters with weak enemies are sold in shops, and equipment that either forces encounters or turns all random encounters off can be found in treasure chests roughly halfway through the game.

Overall, a lot about L’Phalcia is “nothing special”. The first half of the plot can be almost sleep-inducing. The character development is engaging, but takes a while to get really started. The gameplay has an interesting quirk with the character jewel grids, but is otherwise completely typical turn-based JRPG combat. Content beyond the main story is lacking, aside from sidequests and optional bosses.

At the same time, there’s some nuggets of gold to be found among the gravel. The second half of the story is memorable. The strong agency of the playable female characters, especially Tiana, stands out among JRPGs. Optional bosses can be fought at low levels if the player really wants a challenge. The gem grid has some fascinating possibilities.

I genuinely enjoyed playing L’Phalcia, although there’s not remotely enough variety or options to consider a replay. I give it a qualified recommendation, if only because I would love to see more Kemco RPGs with full-sized 3D battle graphics, voice acted cutscenes, and stories as good as the second half of the plot. (Ideally an RPG would have a good story ALL the way through, I know…)

Illusion of L´Phalcia is a game that has its mistakes like all games and that at times has broken animations that make you give several Palm-faces. Even so, let me tell you that fortunately they are details that do not kill you the experience of the game. Well, the strengths of the game are enough to overshadow the great areas of opportunity that illusion of L´Phalcia has. In addition, the argument, although it may feel threshed, makes you intrigued with knowing that it will happen. In addition, the relationship between Ryser and Tiana is fabulous and injects a lot of life into the title. If we add that the game offers a great challenge through battles that will put you at times behind the ropes. In addition to a combat system with 5 warriors. It only makes me recommend this game a lot … Besides the price!