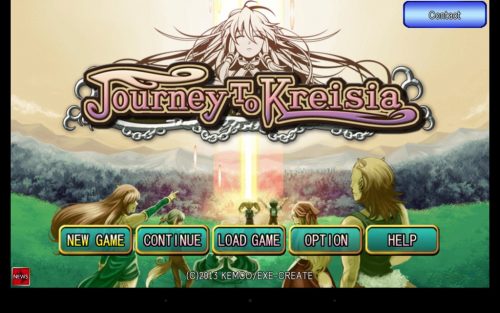 There is 1 review for 'Journey to Kreisia'.

Journey to Kreisia is a turn-based JRPG developed by Exe-Create and published by Kemco. Its battle system is very similar to games like Grandia or Final Fantasy X, and almost identical to Exe-Create’s Revenant Saga (which was made a year later). This review is of the 3DS version, which has no in-game purchases. Instead, the 3DS version has a “points shop” where points from grinding enemies can be exchanged for various powerful items.

The story of Journey to Kreisia invokes a common trope in fantasy literature, television, and games – that of an ordinary, modern-day person suddenly transported to a fantasy world.

Kreisia is a fantastic world inhabited by three races, and periodically menaced by the Overlord. Every ten years, a priestess of Kreisia summons a Savior to vanquish the Overlord and win a fleeting decade of peace; but the Overlord always comes back.

Kreisia’s latest Savior is Yusis, a 17-year-old who dislikes homework, gets nagged by his parents, and has an affinity for anime and video games. He is in way, way over his head.

Kreisia’s story is heavily predictable. What carries it is not the unsurprising turns of its plot, but the appeal of its main characters, especially Yusis, who struggles with things like physical exhaustion from hiking about. There is a fair amount of charm and humor to lighten the otherwise dark story, set in a world that has been repeatedly on the brink of annihilation for generations.

Journey to Kreisia’s turn-based battle system has one unique feature: equipment “levels up” in a sense. As characters fight battles with a specific weapon or piece of armor, it earns points that grants bonuses. But characters still need to upgrade their weapons and armor periodically. Transfering points is possible between weapons (this is needed to keep access to battle skills for much of the game), but not armor. Furthermore, transferring weapon points does not transfer attack bonuses with the weapon.

What makes Kreisia’s battle system memorable is its level of challenge. There are three difficulty settings, Easy, Normal and Hard; they affect the rewards of battle, but not the story. The game’s difficulty can be changed on the fly, but when the difficulty is raised it can’t be lowered again until 20 battles have been fought.

On Normal difficulty, bosses steadily ramp up from “requires thought” to “one wrong move could be catastrophic” and beyond. This is Kreisia’s greatest strength, and gamers in search of a challenge can push the battle system to its limit in optional monster arenas.

Journey to Kreisia has multiple endings, but a second playthrough is required to earn some of its possible endings. Save data from completing the game opens a new game+ mode where levels and items carry over, hidden passages become visible on the in-game maps, additional story scenes are present during the second playthrough, and a cutscene skip feature is added.

The carried-over levels turn 9/10 of replaying Kreisia into a visual novel – but if the player chooses to pursue one of the new endings, the last 1/10 brings back Kreisia’s challenge with an extra side of merciless monsters to go.