There are no A-ne-moi’s here (Get that, A-ne-moi…. yeah I know that was lame.) Examine the door and use the Susurrus Key. Now then…

Now enter the next screen and prepare for a boss…. 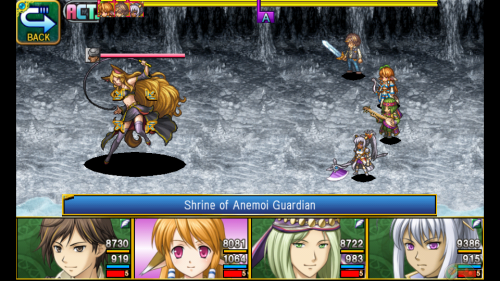 Strategy: Oh, looks like a battle with a Lunarl Female, oh and she also has a whip, well that simplifies matters. *ahem*

Anyways, she is fast, but not as fast as Zea, her HP is less, her ATK is poor, her DEF is mediocre at best.

She uses both Attract and Bash to change the character's formation, so do keep an eye out for that.

Increase both Yusis and Laminah’s Parameter 2 Ranks up, decrease the Guardians parameter down. Other than that, this boss battle is very easy.

Leave the shrine after the battle, go back to Amnadi Hill, and examine the sheep, which will chase you directly back to the entrance…..convenient isn’t it.

Stop back in the Village of Roesch and talk to the Priestess for another sub quest.

Go kill the Brutal Ogres and then report back.

Anyways, then head all the way back to your ship. 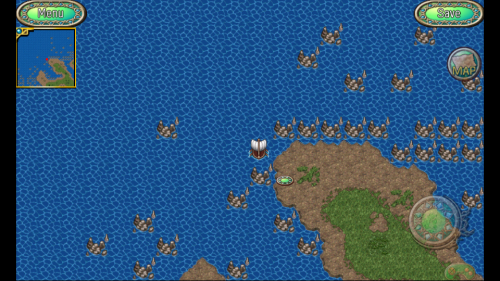 Land here to reach the Town of Cammer

Follow the destination on the map, which located south from where you landed your ship.

Try not to land on any lone island, for your own good. (If you do, the enemies will eat you.)

After you’re almost near the destination, land near the peninsula and head south until you see a bridge, then east across the bridge, then circle around the mountains, and then head north, till you see a small town.

Before entering the town, level up to level 30 and if possible 32.