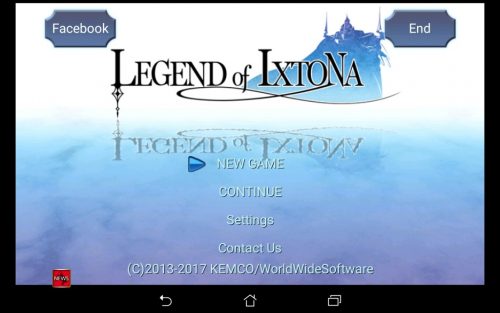 There are 2 reviews for 'Legend of Ixtona'.

This game is quite a bit different from Kemco’s usual offerings as it is a tactical RPG. In this game, you control several characters who move along a grid, and each character has their own unique skills and abilities. Combat is still turn-based, but positioning of your character is very important. The game’s gameplay is interesting because there are a wide variety of customization options offered. Not only are there different character classes for your main character, there are also a ton of customizable abilities that you can equip your characters with.

The story is more of a miss than a hit. The cast of characters is rather large, and this makes it harder for any single character to be memorable. Some of the jokes are also a tad off-color. The biggest problem is the plot. The game starts out at the end of a war that Ixtona and a neighboring country are participating in. As the war’s end is being celebrated, the main protagonist Kyle’s older brother Erbax assassinates the king. (This is not a spoiler as it happens within the first three minutes of playing.) From there, you are sent out to a frontier town, and for a long time, things just happen. It is only about three quarters of the way through that the plot actually picks up steam and becomes interesting. In other words, the plot’s pacing is awful; it is too slow throughout the majority of the game and then it hits you with everything right at the end.

The game is pretty cheap at $4 or so, and it offers a solid amount of play time. It should take about 8 hours to get from the start to the end if you focus solely on progressing the plot. The replayability of the game and side content should bring the total time closer to 12-16 hours (if you do New Game+). Overall, it is worth a purchase and the gameplay is fun. Just keep your expectations for the story rather low; it’s not a bad story, but it is not a good one either.

Legend of Ixtonia is one of the first Kemco games I played and it was amazing. For the most part it was there to fill in my want for a game like Fire Emblem or Final Fantasy Tactics and in return it became something of its own. The characters were fun and the artwork was great.

The game gives you an Avatar to help immerse you in the world and for the most part it does the job. Oddly enough you don’t have the classic silent protagonist troupe which is refreshing.

Though the next point I want to make is how,shockingly , the story wasn’t very predictable. Maybe because I wasn’t thinking about the story as a whole or just was enjoying the ride but the story had some twist and turns that was honestly good.

A nice factor to this game is the replay ability given by both the class and skill system. Since there is so many characters there is a lot of variety to make your team. Though this brings up negative in the game. It is way to short. Even with bonus purchases and grinding I only had up to maybe an eight (8) hour playtime.

Overall I’d have to say that this game is definitely one Kemco’s stronger ones. It is its own gem that I thoroughly recommend to anyone looking for a good tactical RPG to play.