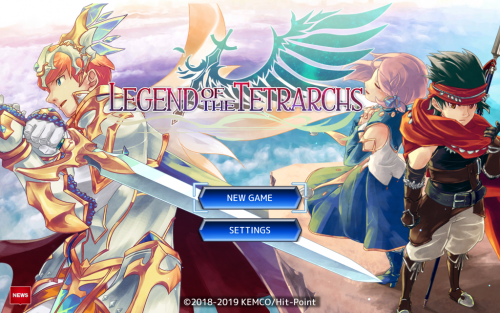 There is 1 review for 'Legend of the Tetrarchs'.

600 years ago the legendary Tetrarchs heroes defeated Jetch: an evil being from the underworld who tried to conquer the surface world and the world of heaven. They decided to lock Jetch and all the doors to the underworld to avoid the villain’s resurgence; so with the legendary sword created by the divinity, they sealed the largest rupture through which darkness leaked and thereby avoided any contact with the underworld. That break with the passage of time was known as the scar. The tetrarchs heroes of the world of heaven promised to remove the legendary sword in 600 years and thereby ensure that the underworld never reaches humanity.
Just the day where the Tetrarchs of light reappears to seal the darkness, one of its allies of the past does not seem to agree very much and things get complicated by starting the legendary game of Legend Of theTetrarchs.

Legends of tetrarchs is one of the most ambitious projects that KEMCO has done because although the game maintains the quality standards with which the company always makes its titles, it is undeniable that The Legend Of Tetrarchs has a little more and this what We look from its duration since to complete it you will have to play about 30 hours.

When you start the game you will take the role of Len a boy who meddles in history by being the victim of a terrible event at the beginning of the game. He will embark on an adventure throughout the world to find answers and justice for his cause. But as justice is not served Solá ;; Throughout your adventure, you will get to know comrades who will be joining your cause.
The characters of the game have unique personalities that are not very contracting because they are always handled according to the context of the game; that is, under a serious profile but that fits in wonderfully with the argument developed by Legends of the Tetrarchs. In total you can ally with up to 10 characters which you can use in teams of 4 people. Something that I liked a lot, is that the game once you have more than 5 characters, does not force you to play with the protagonist. This is something that I liked a lot because this detail even today is not very common in role-playing games.
It is also important to mention that each character has their own work, so the combinations can be diverse each with a different risk and benefit.

Throughout the game you will get some treasures known as Carminas: which are extra skills that your characters can use throughout the battle. For example: Carmina Mercy can practically make you immortal because once the Enemy gives you a K.O. You have a 50% chance of reviving. Each Carmina has several effects in battle that you will be able to discover and it is an additional one that greatly benefits the gameplay of The Legend Of Tetrarchs because each character can use several at the same time.
During your battle you can use physical attacks and skills that are used according to your SP bar. This bar is filled with the passing of each turn and with other ways where Carminas influence.
The rest is according to Kemco quality standards, that is, you can select different speeds for your battles and let it be carried out automatically or manually. Something important to mention is that due to Carmina’s system and the importance that the game gives to pampering: The game does not allow items to be used during battles and they are practically not used in the game. That is why at the end of any battle, you will recover your energy 100 percent.

Something where the game looks, is in the battles against the bosses because they are extremely challenging to such an extent that even to me that I am an old sea wolf in the genre, he has put me many times on the ropes and I had to repeat a and again the battle until it is successful.
Moving on to the game world I liked that the game focuses more on the history of the game and deactivates unnecessary exploration a bit. Also as is typical of KEMCO games, in the menu you can change places on the game map as long as you have already been there. This makes it very practical and perfect for our society today where time is a luxury,
There were some curiosities that caught my attention in Legend Of Tetrarchs: The first was that in the hotels of the city they do not serve to replenish your skills, if not that when you sleep there you will get treasures. The second was corresponding to the treasures, the treasures serve to improve your battle skills and receive bonuses in the middle of combat.
In the game I also liked that it moves away from the boring crafting systems and recovers the traditional of the role-playing games of the nineties where you will have to buy the best weapons and armor or find them through the dangerous dungeons that the game shares with us.
A notable point is that the game forces you a little to play a little more to get the good ending. This is something that other titles like Bond of Skies also have but Legend of the Tetrarchs handles it in a better way than its spiritual predecessor
Something that I should mention and that is fundamental in a role-playing game, is the story. Believe me the story of this title is wonderful. It is a science fiction very well carried out that will keep you glued to the control to know what happens with the tetrarchs and Len.
GRAPHICS AND MUSIC
Graphically, the game is a tribute to 16-bit games, it is truly beautiful, but it happens in a fluid way. Although sometimes it has some loading screen that appears every so often but that really does not take anything, it really is an element that required more polishing by the developer. Although to be honest, it does not affect the gameplay at all. Why the title itself is very practical.
The animations both in pixels and in artistic image are very complete and well carried out. Although being honest, it is also not something from the other world or something that will change your life.
Musically the game meets enough. His melodies are good without becoming extraordinary.

CONCLUSION
Legend of the Tetrarchs is a pretty good game that really addicted you quickly. Thanks to the fact that it has a very interesting story, with changes of argument well carried out and hardly tired. In addition, the battle system is so good that fighting again and again will not be so heavy as it has many options and many curses that in other role-playing games appear only as ornaments, unlike here they help a lot. What yes, is that at times you will need to do grinding to be able to surpass certain villains. While Legend of the Tetrarchs is not an AAA, the game at the time of playing really feels very careful and makes every weight invested worthwhile.