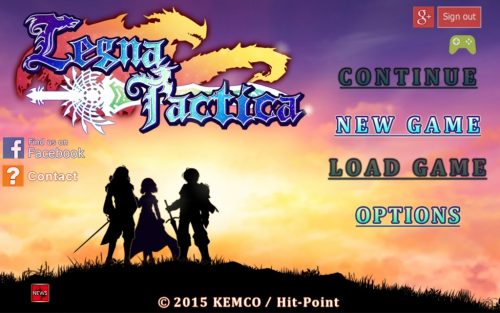 There is 1 review for 'Legna Tactica'.

One of the best SRPGs on any system

Legna tactics came up when I was reading about another game. As a self proclaimed lover of SRPG I couldn’t pass up the opportunity to play even though the game had IAPs. As mentioned by the developers the game can be played from start to finish without needing the said IAPs . Although the TCP shop does allow you to get certain items early on that you would only be able to get near the mid-to-end of the game. I played with the double experience, double gold and double items gained options turned on. This does reduce the grind by a lot so my experience could be a little biased.

The story of Legna tactics is around war and the consequences of war. It revolves mainly around 2 childhood friends that have different visions/approaches about how to get rid of war. The story is definitely not unique but the pacing and treatment is great here. There are a few issues early on and then mid-to-late game but they can be overlooked. Some of them could be due to translation issues or cultural differences between Japan and the west. Overall the story kept me interested and there were some twists and turns that I had not expected. The game does have a few places where the story would play out differently if questions are answered differently. I counted not less than 4 different places.

The graphics for the most part are pretty good. The whole battlefield is available to view via 2 finger panning but there was no option to zoom in or out or to rotate.
The cutscenes are using in-game engine and character sprites are visible while talking. The in game characters are similar to the artwork and I applaud the designers as each character is unique. All animations were good , that said, I will have to qualify that with saying that I am a big, big fan of tactics ogre and FFT graphics as the animation is superb and even on a gba very much discernible which is by no means an easy feat considering the low resolution and small screen size. Legna tactics does not approach the level of detail that FFT does but it is close.

I would rate this as superb. There are no distinct job classes but each character and there are ~13+ recruitable characters in the game has their own unique skill set. The skills and their affect is what I loved about the game. They really have a very noticeable affect and the game allows you to reset and reallocate skill points anytime you want (called proficiency points in the game). The game does give out Proficiency points at a slow rate as they are tied to progression and not leveling. I also don’t think you get enough by end game to have every skill maxed out.

I would rate it is moderate to hard difficulty especially if you are NOT using double experience, double gold and double items. End game bosses gave me some problems even then.

The game is about 30-40 hours long , it could be longer if you do all side quests. Some of the quests are repeatable and your main source of gold early on.

I thought the Titles system and how it tied to the TCP shop points and proficiency points (for skills) was an awesome idea implemented beautifully.
The signpost that allows you to keep track of story and quests was also implemented very well. Overall I think this is a wonderful SRPG not to be missed.