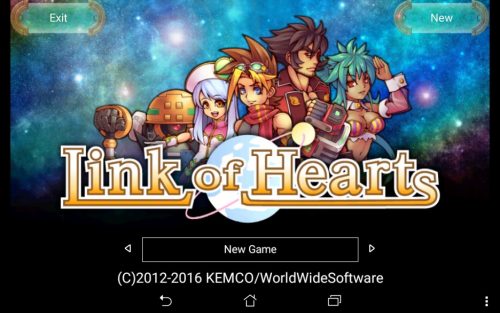 There is 1 review for 'Link of Hearts'.

Mastering the Links for a Hearty RPG experience

Graphics: Retro/cartoony, but overall good. Battles are first-person style, while world map navigation uses an isometric 3D style that was disorienting to me at first. You don’t get to see the full world map until late in the game when you are able to fly, but navigation is never a problem.

Characters: Some personality shines through, although it’s a standard RPG crew for the most part. For those who don’t like benching extra party members, this game has 5 core party members who can all be used simultaneously in battle. There are hidden characters available with IAP, but these are completely unnecessary.

Story: It’s a nice little story, for the most part a group trying to save the Earth from destruction, but with 2 unexpected plot twists, one early in the game and one at the very end, alluding to a dystopian past. The pacing of the story is a little odd, with bits of slow revelation through the game, followed by a sudden conclusion just before the final boss.

Battle: The game really shines in its battle/skills system. The ES system is probably most similar to the “Materia” system of FFVII. Each character gets a number of slots to place skill stones on the menu, which include abilities, passive boosts, and skill boosts. The number of slots increase as you progress through the story. Some slots share “links” which allows you to boost the powers of linked skills. For example, you can boost the “Heal” skill with a stone that increases power to create a stronger heal, as well as a stone that expands the skill to cover the whole party, to create a kind of “Heal All” skill. Experimenting with stone combinations creates a nice strategy that makes the boss fights easier if done properly, without need for long grinding. Weapons/Armor mostly are purchasable in shops, while the best ones are easily found lying in the final dungeons.

Post-Game Content: The game offers 1 additional dungeon and 2 strong bosses to challenge after the final boss. The first of these bosses is a time battle challenge that gives an item very useful for the true superboss after its first defeat. Beating the second, the game’s most powerful boss, will require a mix of some grinding with careful selection of skills and accessories, but is doable with a party level around 50-60.

The in-app purchases did little to add to the game, and I didn’t purchase any of the extra locations. The game offers a mechanism for converting defeated monsters to points, but even after the post game battles, I accumulated only enough to unlock the 2 hidden characters at 40 points each, while each of the extra locations cost 100 points each. For the extra bosses, I used the original party anyway, so the hidden characters really aren’t helpful.