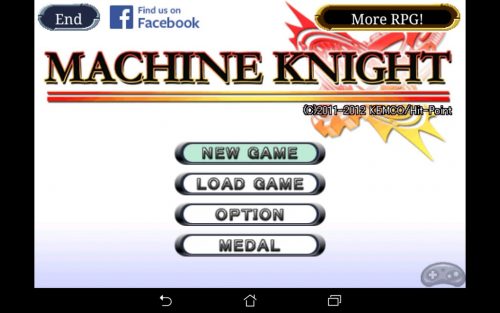 There are 2 reviews for 'Machine Knight'.

The game has an interesting plot hook, but it sort of fizzles out as the game progresses. The game starts by describing how scientists caused an energy crisis in Frain’s homeworld, and Frain is tasked with traveling to negotiate for the energy source needed to fix this issue. Upon soon arriving though, Frain is betrayed and switches sides. He then helps to protect this new world from his former world.

Characters in this game fit many typical stereotypes, but some characters like the legendary musician Yuuizo possess nuance and depth to them. The town of Totori has characters that speak a different dialect; however, the developers way overdid it, and it made the game’s characters look worse overall. The game also features several journals that serve to provide more details about the world and give depth to it. Overall, the game’s story feels more fleshed out and detailed than in other games by this developer, but it still suffers from genericity.

This game features many of the traditional elements of a JRPG including skills and magic. One of the more unique mechanics from this game is something called the Machina Board. This item (which you get early in the game) lets you spend SP (Skill Points) to level up various jobs (basically skill classes) and their associated skills. This provides a degree of customization not often seen in these types of games.

The game has some balancing issues. It starts out way too easy, but after a certain point, the game goes from too easy to absurdly hard. It would have been nicer if the change was more gradual.

Overall, I would recommend giving it a try especially since it is free to download.

It was a little confusing in the beginning, because the story line was like starting at the end of the story. The controls were okay. The adds were annoying in the free version.