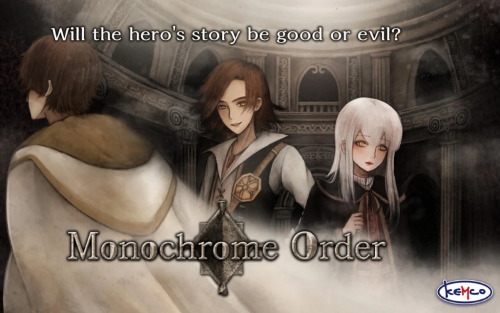 There are 2 reviews for 'Monochrome Order'.

Monochrome Order is an incredibly unique RPG, with a satisfying gameplay loop that sees you bouncing between traditional turn-based RPG elements and a series of story scenarios that require you to flex your moral and philosophical muscles. Choices matter in Monochrome Order, both in the main story and in each of the 35+ sidequests you’ll encounter. Players will consistently be put in the position to decide the fate of NPCs, affecting the game world in ways you can tangibly feel through gameplay. Combine this with a branching story with multiple endings, and you’ll find a stellar RPG experience with solid replayability.

The core gameplay of Monochrome Order centers around the Judgement system, the means by which the player decides the fate of NPCs in the world. Each Judgement begins with a request from an NPC, usually one of the officers of state, but sometimes from everyday citizens. They will explain a prickly moral quagmire affecting citizens of the country and let you know who the conflicting parties are. From there, the players must speak to each party, and sometimes bystanders, to investigate the facts of each case. Once all the information is gathered, the player makes the decision to favor one side over the other. You are then treated to a final conversation with the quest-giver explaining the outcomes of your choice.

The real weight of the Judgement system is in these outcomes. Depending on your choices, you may gain gold rewards, recruit party members, acquire rare items, or even change what shops are open and what items you can find for sale. In addition, each decision has a macro-affect on the world around you, across three main areas. Improving the Economy results in lower prices and sales in stores. Improving the Peace results in both cash rewards and decreases the chances of being attacked by bandits on the world map. Finally, improving your Fame allows you to recruit special party members who will only join your party if you are sufficiently known for good judgement and fairness.

Wrapped around this Judgement system is a traditional RPG adventure that will see your party traveling from town to town, exploring dungeons, slaying monsters, and managing your precious resources. The world map itself using a node-based system, where the only random encounters are random bandit attacks. Each node represents a region of the world, which can be explored and traveled in more traditional RPG fashion. These areas feature winding paths, hidden treasures, and random monster encounters of their own.

The game handles well with a traditional controller in your hands. Given the number of game systems at play between managing equipment, abilities, judgements, and navigating the world map, there’s a bit of a learning curve. Early on, you’ll find yourself misclicking here and there, but once you get the hang of all the shortcuts, you’ll chug along nicely. Of special note is the battle system controls, which uses a ring-based system that is speedy and intuitive.

From a story standpoint, Monochrome Order’s real strength is in its sidequests. Almost every scenario spun to you will force you to think long and hard about what the just and moral choice will be. You may be faced with cases involving medical treatments, scientific research, interpersonal conflict, romance, personal responsibility, and economics. Your decisions affect lives and bring real consequences for yourself and the NPCs that inhabit the world.

The main story, meanwhile, is a bit more trite. While it is not without its twists and turns, the developers unfortunately choose to let you see behind the curtain on the main villain’s plot too early and too often, telegraphing to you what the “good” and “bad” story choices are. This takes some of the fun out of the roleplaying. That being said, there is enough variety between the different scenarios (particularly between the most good route vs the most bad) to keep you entertained through multiple playthroughs.

The battle system in Monochrome Order appears simplistic at first, but really comes into its own as you experiment with different characters and strategies. At the core, the game provides basic turn-based combat, with you characters lining against a team of enemies. Standard elemental weakness are present, and uniquely applied to both the enemy party and your own. Each party member you receive is assigned an element which informs their own weaknesses and strengths.

Each turn, your party can use a variety of actions. Basic attacks, character-specific abilities, items, and a variety of “wait” options are available. These wait options allow you to power up your next attack, restore SP (the game’s version of mana), or defend against attacks. These wait options also affect turn order, allowing the character to speed up their next turn. Some abilities trigger similar speed affects, and the turn order is tracked on a meter on the side of the screen.

The way the game handles status affects is of particular note. Each status effect comes in two stages – a less, unreliable stage and a more consistent stage. Applying a status affect twice allows it to upgrade to its more dangerous form. Stupor, which makes your character miss about 50% of their turns, turns into sleep. Darkness, which lowers a character’s accuracy, turns into blindness. Only specific characters you can recruit and items you can unlock through the Judgement system offer the ability to trigger these status affects, creating a good deal of variety in your options depending on who you recruit and use.

Each character comes with three unique skills, which may deal extra damage than a standard attack, attack with a specific element, or trigger a status effect. Each skill can be upgraded using items called skill orbs, which can add additional effects such as life drain, increased power, decreased SP cost, or add additional status effects. This extra layer of customization allows you to further tailor your strategies and streamline your battles.

Monochrome Order’s gameplay loop results in a excellent experience that can keep you entertained through multiple playthroughs. If anything truly negative can be said about the game, it’s that the New Game+ option offered at the end of each run keeps your characters’ levels, experience, and equipment intact. This makes most of the core RPG gameplay in subsequent runs meaningless, as even newly recruited characters level up to match your existing party. Even so, the game remains one of the most entertaining and unique in KEMCO’s library.

A Twist On The Usual

== Gameplay ==
For those expecting the usual RPG, this is one is totally different.
Battles leave the spotlight and becomes a side feature.

In a world where not everything is as black and white as it seems, you’ll have to pass judgement on rather polemic questions, which is very rare in Kemco land. Can you balance between the “morally right” versus the “collective greater good”?

You’ll be doing boolean choices (“Innocent/Guilty”, “Kill/Spare”, “Allow/Disallow”, etc.) and these will change the game – Which party members will be available to recruit, where the story will go, etc.

== Battle and Skill System ==
Each character has three fixed skills, which can be tweaked (powered up, cost reduced, or some other bonus). The characters have a single weapon, which can be refined. It’ll change name at certain refine levels.

This system actually plays very well in this game. In fact, I prefer this simplified system over some other games where the micromanagement is insane.

Combat is very straightforward, and I liked it. There is beauty in simplicity, and in my opinion, this game managed to get the right amount of simplicity to be enjoyable.

== Story ==
There is a story to each judgment, which will try to involve you on it. These are well executed… in most cases. A few will not provide you as much information as you would like, and some may even grow annoying after a while.

The main story has five different endings based on the decisions you make. It is interesting, and does not feels bland.

== Other elements ==
Maps are well done, art is hitpoint-standard, and sonorization is good enough for immersion.

If you do not like Visual Novels, you probably will not like this game, as it errs more on the VN side than on the RPG side.

…This being said, strictly speaking, VNs are more true to “RPG” than RPGs themselves, so there’s that.

Also, replayability.
I mean, it is great having five paths and your decisions actually having an effect ingame (instead of being just cosmetic). However. In my opinion it is a bad point, because:

Controls.
They could have been a lot better. On computer version they’re less annoying, but not adhering to the “ZXC” convention makes it unintuitive to use on a Qwerty keyboard; And on mobile, well… You can read the complains on the forums.

In the end, the poor controls make replay tedious at best. The cases story themselves also do not change, so while the result can change based on your actions, the causes will not. And reading the same cause over. And over again. Can get quite dull.

== Conclusion ==
If you’re a bit bored from the hack’n’slash most RPGs provide and want a change of pace, this game is for you. I believe it is worth $9.