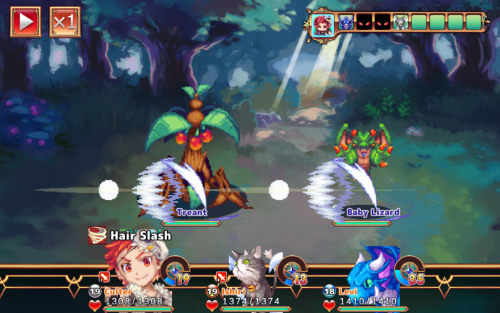 There are 2 reviews for 'Monster Viator'.

I bought this game b/c it sounded like a interesting mashup of Pokemon meets JRPGs. Surprisingly, this game entertained me more than the Pokemon games ever did.

You play as a kid named Culter who has lost his memory and has the ability to understand monsters. The only thing he remembers that he has a brother. With the help of a shepard girl named Aira, Culter must journey through the world & gain monster allies to help him find his brother.

Battle system is turn based with 4 party members; two of them are gonna be monsters while the other two will be Culter & Aira. Skill system is fun; you have different character classes you pick up from each town such as Warrior, Diviner, & Outlaw. You also have a subset of abilities called Carmina that can turn the tide in battle & be equipped & unequipped outside of battle to suit your needs.

Other features I enjoyed was how you didn’t have to heal outside of battle & how you can strengthen equipment you find with gold instead of buying new equipment often. I also liked how the game encouraged you to explore your surroundings to find new Carmina skills or stat boosters and how completing certain subquests have you gain a new monster ally. Touch controls are decent, though some taps move you farther than needed.

The monsters were quite interesting; my favorites were the Slyphs Windy & Flare and the Dragon lady Tina

One issue I had was not knowing how to activate a couple of subquests that involved talking to certain people. The majority of subquests pop up automatically as you journey, but some must be activated to be completed.