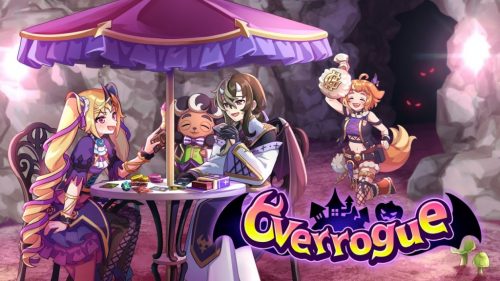 There is 1 review for 'Overrogue'.

======== First Impression
To be honest, I like card-based games and it shows potential, even if I’m not very fond of the theme itself.

However, I never played the game everyone says this one is trying to mimic: Slay the Spire. Never heard of.

A bit before, though, I found out you’re booted to level 1 when you leave a dungeon, and I really hate level reset feature, so was torn between giving up or trying it.

======== Comments After Playing
The game is decent. You can gain blightstones from dungeons and exchange them for permanent level boosts, and there’s “stickers” which give passive boosts. However, this game relies heavily on randomness, as every time you enter a dungeon you’re back to a “basic” deck and must go opening treasure chests to make a decent deck. There’s a shuffle feature if the treasure chest doesn’t have anything you want, which you can use once per floor, or per chest if an upgrade is purchased.

This being said, you probably noticed that everything is resolved with Blightstones, the real game currency. With blightstones you can increase how many actions you can take per turn, boost your starting level, get stickers (passive, permanent boosts) and basically anything which actually makes the game easier. Finishing a dungeon gives you some, and playing on Easy difficulty will yield less blightstones than playing on normal… Which isn’t a lot. And is why this game is grindy.

AND there’s no manual save I could find. I absolutely HATE auto-save.

Swapping a char to the back row (“change”) heals them, but when you use change, all characters move one tile ─ so only frontline can go to back row, which is what you probably want anyway.

======== Rating Summary
For short, because you can’t grind, you must grind. Whereas in other games you grind to raise levels, here you grind for currency. Card battle, however, takes quite some time, as you practically need to finish a dungeon to get the currency and that’ll take at least 10~20 minutes.

I liked the game ─ it was pretty fresh from what Exe-Create usually develops. The concept of the home screen was nice. Gameplay could be 5 stars, however:
─ no manual saving is unforgivable;
─ the grind for blightstones is annoying and will take so long you actually have to question if it is worth it;
─ it relies in RNG more than I would like, but this is really minor.

Controls are decent, story… I particularly did not like it, but this is a personal opinion. Battle system was OK and different, skill system was OK too but the RNG and the blightstones grind ruined any differential it could have.

Definitely not my favorite, but not bad.

======== Monetary Worth
Eh, it probably is worth the same as their other products. It’s good they went out of their comfort zone and produced something which is not their old “recipe to make a game which sells”, so if you want to play a Kemco game which is different from others this one isn’t bad either.
However, it has several minor things lined up against it which might be more a question of taste than of the game itself.

IMPORTANT: Do not buy the PC/Console version. It is hopelessly broken. DO NOT buy there until Kemco patches a rather major bug which is not saving Blightstones ─ and I probably already explained how important they are, right?