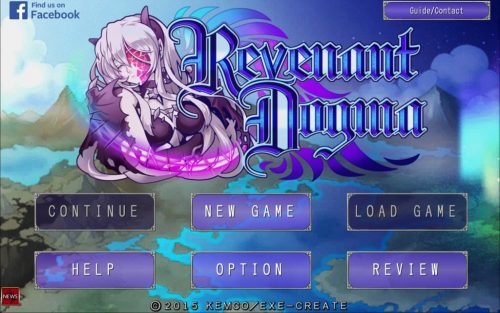 There are 3 reviews for 'Revenant Dogma'.

This review is for the Sony Playstation 4 version of Revenant Dogma, which has a base price of $15 in the US. In the PS4 version, the player automatically acquires an in-game currency from winning battles. This in-game currency can be spent on powerful items in what I assume is a cash shop on the smartphone version. Shop items are unnecessary on Easy difficulty, but almost required to struggle through Normal difficulty and above.

I had a minor technical issue with PS4 Revenant Dogma. The very top and bottom of the game’s display were cut off on my TV screen. I don’t know if this problem was the game’s fault, or my fault for playing on a very old 720p HDTV. The cutoff display made it hard to read messages about battle events, or make out the numbers representing each character’s limiter. Playing on a Vita TV fixed the display, but introduced a much worse problem of gameplay lag and sudden crashes.

I chose to play Revenant Dogma on my PS4 and accept that most battle messages would be unreadable. On the PS4, there was only a little bit of lag before and after some battles, and the game never crashed once.

Revenant Dogma is a sequel in another, more obvious way – recycled assets. Revenant Dogma’s music, many of its 3D polygonal monster models, some of its overworld spritework, and the core features of its turn-based battle system are all from Revenant Saga.

I don’t want to be too critical of Revenant Dogma’s graphics, because Revenant Saga and Revenant Dogma are two of very few Kemco games that dare try for 3D battle graphics, in the style of classic Playstation and PS2 RPGs. (Outside of battles, the graphics are all 2D sprites.) The 3D battle models of the playable characters look glorious in both games, by the standards of budget-priced RPGs.

Being KO’d while transformed isn’t as devastating as it was in Revenant Saga. In Revenant Dogma, a transformed character can be revived when KO’d. The revived character will lose half of their SP (used to unleash skills), but SP can be replenished with items anyway.

One problem with the combat system in both Revenant Saga and Revenant Dogma is that there aren’t a lot of options. New skills are gained solely through story progression and leveling up. Speed is a vital statistic for gaining more turns in battle. Keeping Speed as high as possible – both with buffs and by customizing the party’s weapons with rare speed-boosting ores – is practically required on any difficulty above Easy.

Revenant Dogma’s biggest flaw is its WILDLY unbalanced difficulty. The player can change the difficulty at any time out of combat, but there’s no good choice.

“Easy” difficulty almost turns Revenant Dogma into a visual novel. I say “almost” because the player still needs to pay minimal attention to boss fights, or giant monster fights. Fleeing from random encounters (or using the shop ring to turn random encounters off) could theoretically keep the party’s levels low enough for a challenge game on Easy.

“Normal” difficulty for Revenant Dogma is much harder than “Normal” for Revenant Saga. It’s harder than “Hard” for Fernz Gate. “Normal” flat-out requires grinding not only to level up, but also to earn money and purchase enhancements for the team’s weapons. (Between customizing weapons and a battle move that uses gold to deal damage, gold NEVER becomes useless in Revenant Dogma.)

When I tried to play on “Normal”, I ran into a wall when ordinary, random encounter monsters devastated my party just before entering the second town. Ordinary monsters hit my party like trucks, and my party could not kill any monster quickly. The party’s weapons just didn’t have enough attack power; raising that attack power would have involved heavy grinding for gold to strengthen their weapons.

I never tried any difficulty above Normal. Only the most grind-happy gamers should sign up for that much pressure, but for those who would try, the best place to grind is the Ethereal Est optional dungeon. Ethereal Est is a randomized dungeon intended to help a party of any level grind money, weapons, and experience. Ethereal Est is introduced in the very first town, and accessible from every town in the game.

Revenant Dogma’s story is its best feature. The story is set on a world divided between humans and beastly therians. Caine and Julie, two humans who failed to become “Revenant” super-soldiers, stumble across a mysterious masked woman and rescue her. Their attempt to escape brings them into conflict with the therians, who take them prisoner. Their fate becomes tangled up with the looming threat of war between humans and therians.

I enjoyed playing Revenant Dogma on Easy for its story… but without the required grinding forced on the player by Normal and above, Revenant Dogma is a short game. Leisurely finishing the entire story (including postgame story), all sidequests, and the recommended-level-50 part of Ethereal Est took less than 17 hours.

At that point, the only optional content to further extend gameplay was the “endless” Ethereal Est dungeon (finishing the 100th floor of this dungeon nets a PS4 trophy), or fighting the “Guild Hero” optional superboss (who practically requires maxed-out battle statistics to beat), or getting all possible trophies. None of that was more appealing than moving on to another game.

I don’t regret buying and playing Revenant Dogma, but I also find it hard to recommend, even to niche fans of classic turn-based JRPGs. Revenant Dogma is for the niche of the niche – players who either enjoy JRPG stories enough to disregard a near-complete lack of challenge (if played on Easy), or who enjoy punishingly hard and grindy JRPGs (if played on Normal or above).

Or possibly for players who loved Revenant Saga. The story connections between the two games were my favorite highlight.

Disconnected from the Prequel? (SPOILERS)

This RPG was one of the first I played from Kemco and in retrospect, it isn’t as great of a game as I originally remembered but it is still very balanced in most aspects.

To start with, the characters are not as boring or generic as other games and the character development is definitely there. Fleon especially being the most mature out of the others. Of course, the girl characters want a love relationship with Caine but it did not feel as intrusive as other games. The supporting characters are decent as well. Elize in particular is the best out of them. Having turned on his brother for the sake of just having him close.

The story itself though is a whole different “story”. At times I felt on edge (such as Premier Dverg’s passing) but it’s not that great until you get near the end of the game where things get intense really fast and the stakes seem much high.

Part of this is due to the music. From what I have heard, some of it is reused from Revenant Saga. The final boss music is especially amazing. Kemco really never skips on the OST.

The balance in progression and grinding is not that great as difficulty for bosses ramps up and that makes it NECESSARY to use Ethereal Est dungeons. The battle system is generic at best but the reusing of Transformation mechanics gives it the flavor it needs. The exclusive skills though are a mixed bag as it raises the Limiter by quite a bit when changing to a different form for using a specific skill.

Recently I have taken notice of the particularly “ugly” aspects of the 3D system. Especially when in forest areas with the low quality grass textures and other textures also lacking good image quality.

The premium shop is lacking at best but does have a couple of items rhat interest me. Aside from that, end game is really lacking and this is where Glorious Savior shines as it has callbacks to many different games through the characters you fight in that game’s equivalent of Ethereal Est. Ethereal Est in general is just a vibe outside the dungeons and pretty packed in the last dungeon with that having it’s own soundtrack too.

As far as I’m concerned. It also seems to be mostly a standalone experience from Saga. Aside from a battle with Albert (or the Feral God), it is mainly a standalone game much like Asdivine Hearts 2.

A well-made RPG with a deep and articulated story. Honestly, it’s my first review on the site and the first Kemco game I’ve ever played, my experience is mild.

Given my familiarity especially with Final Fantasy and Dragon Quest I can say that this has a pleasant and sophisticated interface.

A slight shortcoming that I have noticed is the disconnection of some events from each other (only in some cases), and the stories of the characters from each other but maybe that’s exactly what makes the story so intriguing and fascinating.

The game system is extremely smooth and not very complicated, the level increase too.

Weapon upgrading may be less monotonous, more exciting and elegant.

There is also Ethereal Est, a mystical world that players can access via wormhole-like portals that can be found in towns and villages where you can improve experience.