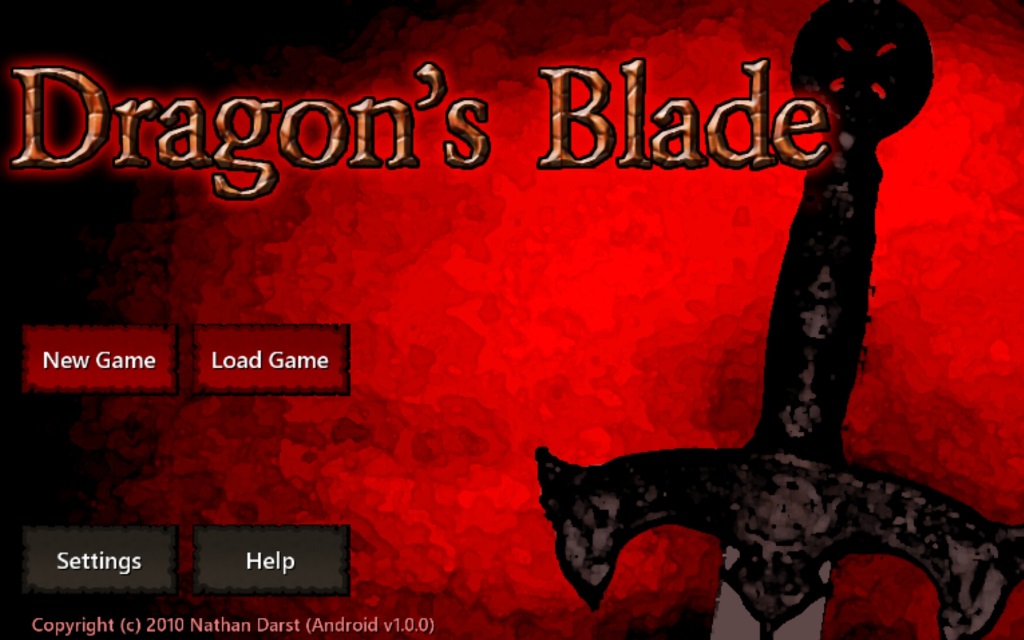 Why I Ultimately Bailed on Dragon’s Blade

Dragon's Blade may very well be one of the finest mobile RPGs I've ever played. So why am I quitting halfway through? Well, I'll tell you, but first, let me give you an in-depth review of all the game has to offer.

It was first released in 2010 for Windows Phones, but due to the popularity of the game, it's now available on Google Play as well. The game was developed by one person - "Nate Monster" - who since has gone on to release Heroes of Larkwood, Dragon's Blade II, and Darksong Chronicles (all for Windows phones and pcs only).

There's even an entire website dedicated to the game (with a great forum - and a link to a really detailed location walkthrough).

There's actually not much to the story in Dragon's Blade. Your party wakes up on a foreign shore, and through a series of unrelated quests, you gradually work your way back to your village, where you're tasked with tracking down (and defeating) the dragon that's terrorizing the lands. 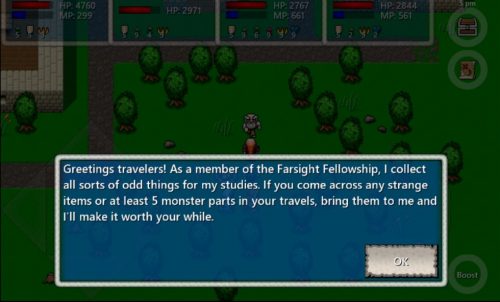 Members of the Farsight Fellowship will give you gold and EXP for all the monster parts you bring them.

The storyline is pretty straightforward.

Each town you come to has one person who'll give you some information about where you need to go next, so all you need to do is find that person, and then go where they tell you to go.

However, there are also some NPCs who will unlock hidden sidequests. These sidequests are different in each town, but they all seem to involve your party "finding" some missing item and returning it to the proper NPC.

There's also one NPC in each town who will reward your party every time you bring them 5 "monster parts."

(Monsters in battle occasionally drop "pieces" of themselves, like a tail, foot, or claw. Delivering these pieces to the collectors yields a good amount of gold and experience, making grinding a little bit easier.)

The game is a classic turn-based RPG, similar in look and feel to the early Final Fantasy games. It lets you create your own characters, and guide them through a rather large world map, all while fighting monsters, upgrading your skills and equipment, and exploring the forests of the world in search of hidden treasure.

The menus are all optimized for touch screens, and after an hour or so of gameplay you'll easily have them all figured out.

One really cool feature in this game is the "instanced dungeon" in the town of Larkwood. The instanced dungeon is randomly generated each time you enter it, and the monsters are based on your current level.

Early in the game, this is a great place for grinding, but later on it's probably a toss up between grinding in the instanced dungeon, versus grinding on the world map near the last town you've come to. Either way, the monsters occasionally drop monster parts, and they also drop equipment and magic books that will sometimes be stronger than your current equipment.

The spell system in Dragon's Blade is actually pretty cool. Spells come in books or scrolls; books can only be used by magic users, but scrolls are a one-time spell and can be used by anyone. There is a level requirement for all books and scrolls, and the higher-level spells are considerably stronger.

There are three classes who can use spell books - the Templar, Sorcerer, and Cleric. Each one "learns" new spells by placing a spell book in their inventory.

Each character can hold up to 8 spell books, and so your magic strategy may change throughout the game, depending on which books you choose to equip. 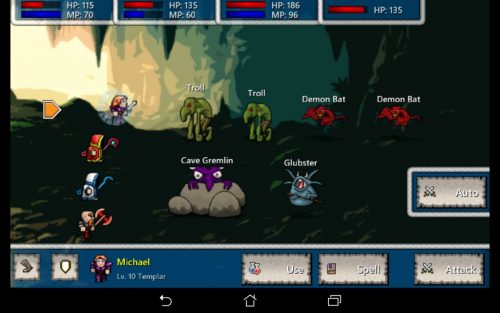 Generally speaking the battles will provide some challenge. However, you'll sometimes need to do a lot of grinding in a new area to avoid getting killed in battle.

If your party dies in battle, they'll be teleported to the nearest town and will have to go the Inn to be revived. (You'll also lose half your gold - but you do get to keep all your equipment.)

Note: if one party member dies in battle, they won't receive any experience when the battle ends.

So Why Did I Bail?

Dragon's Blade provided me with days of entertainment, but in the end, it just requires too much grinding.

In the first two towns, you need to do enough grinding to buy the best equipment, and reach the necessary levels for the strongest magic books. That's not too much of an investment at that stage, though, as it only takes a couple hours. And after that, it's smooth sailing for the next several locations.

But then you get to Norwind (at about level 40-42). And, in order to face the boss in the next dungeon, the walkthrough recommends that you're level 60.

At this stage, it takes probably 30-45 minutes to go up one level. Meanwhile, you can almost count on the fact that one or more of your party members will die every few battles - meaning they lose out on the EXP... and they need to be revived... and you'll need to use a couple potions to restore their HP and MP... and after awhile, it just becomes too much for a casual player like myself.

Hardcore gamers might be willing to put in all the time it takes - but for me it's just not worth the effort.