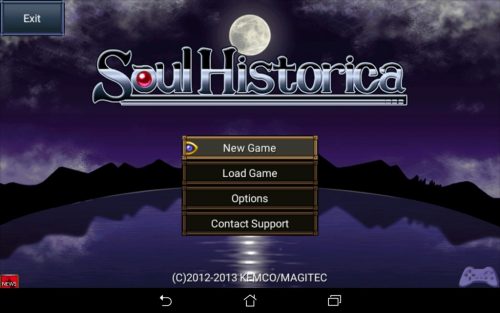 There is 1 review for 'Soul Historica'.

Story: It starts off as one man’s quest for revenge after his girlfriend gets sacrificed in a war against monsters, but builds into a nice non-standard RPG plot that brings in themes of human evolution, sacrifice, and an overall concept similar to “The Matrix”. The unique feature of the game is dividing its story into 3 possible endings, which all start the same way up to the halfway point. There, you’re asked to choose between 2 possible paths each leading to one of the 2 bad or bittersweet endings. After completing both paths, you’re offered the option of a 3rd path leading to a good ending with some added post-game content.

Characters: The story is very character driven, and I found the 4 central characters York, Eris, Fiora, and Arioch very memorable, struggling with complex motivations and human emotions.
Each story branch (including the “good ending”) involves 1 or more of the main characters permanently dying, which although sad, makes the story stronger.

Gameplay/Battle: Apart from the one story branch point, the game is very linear, with the world map reflecting this, you move from dungeon to town, and repeat. The dungeons themselves are a standard linear maze as well for the most part, though some of the later dungeons involve some tricky one-way conveyor belts and portals.
The highlight of battle is the souls system, where each character has two slots to equip souls collected in chests or in battle. Each soul gives bonus attributes / passive effects and is assigned a number of colors which affect the class system.
The classes available to each character differ for each character, but include 3 branches, each with 3 progressive classes, each with 3 class levels. The branches open depend on the souls. Each time a character levels up a class, they learn a new skill permanently.
For example, a “magic” character like Fiora can progress through a pathway focused on attack magic, a pathway focused on healing, and a pathway focused on support skills. Mastering all the classes requires a full 3 playthroughs. Although it’s tedious to repeat the whole story 3 times to see the true ending, the fact that everything except character level carries over from each playthrough makes things tolerable.

Once you beat the game’s 3 challenge bosses and obtain free IAP points, you start getting the game’s most powerful souls which when used in the right combination, allow you to survive the tough final battles, and allow you to switch classes freely.

Overall, I would highly recommend this game for its fantastic, unique, story-driven experience with a creative battle system that keeps the gameplay entertaining to the finish.