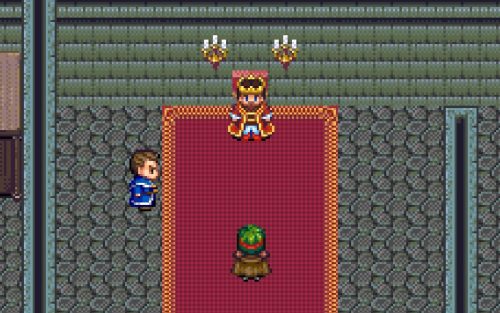 There are 6 reviews for 'Summon Mate'.

A Fun Monster combat raising/breeding rpg. PLAY THIS GAME ON HARD NOT EASY. This game is cryingly boring and easy on EASY. It is so easy you can just auto click away at the game and ignore all the game mechanics and still beat every boss. On Hard you are forced to think about your boss engagements and use the many mechanics in the game to overcome and out think your bulky hard as hell hitting foe.

Game is free and the ads are so non-intrusive I have no idea how they make any money on this game. There is NO STORY. You just get pointed in different directions and are told to go there. Its hard finding place you need to go sometimes but there are guides on this sight. I have a lot of fun and got caught off guard getting addicted to this Dragon Warriors: Monsters type 8 bit game. Started out as something to do when waiting then it got be hooked on the challenge and the more and more detailed mechanics I kept getting deeper into to out do the steroid up bosses.

Not a perfect game at all but if you like teams of monsters you can raise, level, and breed and get more abilities/stronger while going on a journey. This is a nice little gem. Just dont expect much more : )

good game but i am stuck now

im stuck at the world tree stoped growing and the red dot keeps is at next castle.

Can someone please help me find the Satori Book? I have been looking for a while now. I know some people are saying the mysterious cave? Is this actually the mysterious forest? Because I have searched there for a long time. Please help?

I don’t know how to open door in 3rd floor on left tower, i already finish the right tower, but im stuck on left tower .pls help ,thanks

Love it and fusing monsters

An Awesome Journey With Unsuspected Connections!

What can I say about the game besides that it’s Better than I expected it to be? I had no big Hopes for the game so for me, the game is Great! Of course I would normally give much lower Rating, But I found this great game as enjoyable as Tenmilli-rpg!

So let’s start off with the Story. I’m 80% sure that in Japanese language it would be more detailed and until the very end I didn’t have any idea what is going on here except doing some Tasks. And beating Bosses.

If you were tired of having One Set Party throughout the Game, here you can get A Lot of Monsters that you can capture, Fuse and Fight with! And By Fusion you can make a Powerful Monster with Great Healing Magic which is also Great!

Although (On Easy) You will mostly have Auto Fights but you still have to do some battles by yourself and that’s great 🙂 But I already see how much Grinding it will take to do everything..

Overall, Summon Mate is a Good Game which you can beat in a Couple of Hours and can Restart with All monsters and Most Items if you want! I like this game almost as much as Tenmilli-rpg!