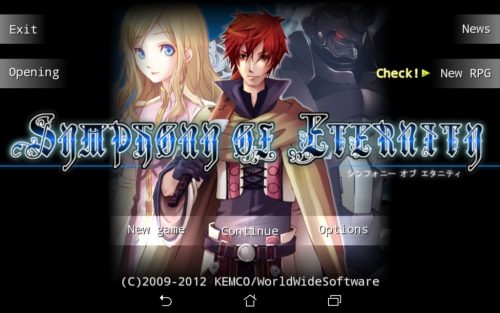 There are 3 reviews for 'Symphony of Eternity'.

This Final Fantasy-inspired game has a fair amount of customization, no random encounters, and... no cash shop?

This review is for the Nintendo 3DS version of Symphony of Eternity. I know of no difference between the 3DS and mobile versions other than the controls; the directional cross of the 3DS is very nice for dodging monsters, or moving diagonally in dungeons. Diagonal movement in dungeons is occasionally required to progress, or to collect treasure chests.

Other 3DS Kemco RPGs had the cash shops of their mobile versions either removed, or altered to accept a currency that is farmed in-game. In Symphony of Eternity, it seems like… no cash shop ever existed? Even on the mobile version?

A cash shop would be completely unnecessary regardless. Symphony of Eternity has only one difficulty setting, and while it is modestly challenging, excessive level grinding or job grinding is not required to finish the game.

Symphony of Eternity feels strongly inspired by the early Final Fantasy games, especially with regard to its artwork. The pixel sprites of the characters and the stylized art of the monsters would not be out of place on a Super Nintendo system.

The soundtrack of Symphony of Eternity may also draw inspiration from Final Fantasy. Symphony of Eternity has astonishingly good and varied music, especially by mobile RPG standards. There is even a little voice acting, limited to the battle cries of the playable characters and some bosses.

Symphony of Eternity’s plot has a fair amount of political intrigue, but the story and characters simply don’t have enough time to be very deep. The game is only 20 hours long, excluding postgame optional dungeons and bosses. There are no sidequests.

Perhaps Symphony of Eternity’s plot is weighted a little too heavily toward political intrigue, since many of the story’s behind-the-scenes machinations don’t directly involve the three main characters. There is relatively little character development, except for one person. Another problem with the story is that it is heavily (although not completely) predictable, especially to players familiar with JRPG and anime tropes.

Symphony of Eternity’s game mechanics are primarily standard turn-based RPG fare, with a higher-than-average amount of customization. There is a simple job system to teach characters skills; switching between jobs can be done anytime out of combat with no penalty. A stance system gives additional flexibility in battle.

The heart of Symphony of Eternity’s character customization is the merit point system, which allows the player to drastically power up the battle statistics of their choice. There are so many different battle statistics that maxing out merit points for more than a few of them is impossible!

Symphony of Eternity has one potentially severe problem with the philosophy of its game design. The player is occasionally forced into story situations where the party’s composition changes, and/or retreating to a town is impossible. Pragmatically keeping backup saves and carrying lots of healing items is emphatically recommended, when both measures are often unnecessary in other Kemco RPGs.

Regular encounters in Symphony of Eternity are not random. Monsters are visible as sprites in the game’s dungeons. The player can ambush monsters (by running into them from behind), be ambushed by them (if a monster runs into the player from behind), or avoid them altogether (this is a little tricky, since monsters will chase the party unless a certain late-game accessory is equipped).

Symphony of Eternity’s greatest strength is its gameplay challenge and customization, which keep its battle system interesting. The postgame has two optional dungeons and seven optional bosses, which potentially add another 5-10 hours of gameplay to the 20 hours of the main story. There is a New Game+ feature that carries over levels and equipment, but its only use is to steamroll the game and re-experience the story.

Overall, while Symphony of Eternity’s story falls squarely in the realm of “JRPG comfort food”, its battle system has enough challenge and customization to rise above that level. If the player can put up with the game’s old-school quirks (blocking the player from leaving a dungeon is such a 1990’s stunt to pull) then there is a solid, if not especially standout, adventure to experience.

Looks a bit primitive, but well worth playing.

And here it is: The first Kemco game I truly enjoyed, as opposed to just going through because it scratched the “short RPG” itch. On the surface, there’s not much to it. It’s pretty ugly (except for a number of well-drawn bosses) and if you try to go anywhere besides where you’re told to go for the plot, you’ll simply be told that you can’t go that way.

But, the more I played it, the more I liked it. The plot featuring a human and his golem pal finding a princess who escaped from a bloody coup at the castle and assisting her was simple, but entertaining. The dialogue wasn’t overly wordy or intrusive. Characters gain books by which they obtain classes, each with their own skills to master and there’s a really nice level of challenge. The sort where you have to use resources to win battles and move strategically against bosses; where you feel like you’re being pushed, but not in anything resembling a near-impossible situation. Instead of random battles, enemies appear as sprites in dungeons, so you choose to either kill them all, or simply run past them. This also allows for preemptive strikes if you can run into them from behind (with the reverse holding true if you let them do the same to you).

Like most World Wide Software games, the dungeons are short and simple, but that didn’t really bother me because I simply had a good deal of fun with this game. It might be one of the oldest Kemco mobile games on the market, but as long as you can overlook the often-crude and primitive visuals, this one is well worth your time!

I played this game after Symphony of the Origin, and recognizing that this one comes before “Origin,” I have to factor in that the graphics and the battle system in this game are not quite as good as they are in “Origin.” Still, this game was a lot of fun, and I felt it had a good story line.

I like that you can see the monsters on the screen (and avoid them, if you want to) and I liked the idea of the skill books. The only thing I didn’t like was in the final dungeon/boss battle, it seemed like the game was building up to some sort of epic battle with all the different characters in your party – and it never happened. Still, overall I’d recommend this game above some of the other Kemco titles. (I was not a huge fan of Alphadia, but the Symphony games and End of Aspiration are pretty good.)

Took me around 20 hours to finish this game, which wasn’t bad, but it could have been 2 hours shorter and I wouldn’t have minded.

One thing that REALLY annoyed me – little trees and rocks, etc. in the path that you don’t always see and that you constantly get stuck behind. You’re like, “I’m tapping over here, but I’m not moving. Why? Oh, right, there’s a dumb rock in the path.” Other than that everything was good.