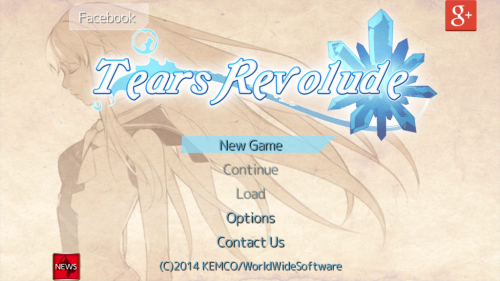 There is 1 review for 'Tears Revolude'.

Another short but fun game from World Wide Software.

The fact the side-characters have a portrait shows how much love was given, but then, WWS did made Legend of Ixtona. It tries some pseudo-3D, and the skill system is really fun to play with. There’s minimaps. The music was not very remarkable but was good. The story was a bit cliché, but was nice. The characters did not felt like husks only doing what plot mandates, I can even remember whom they were (but names were forgotten), but the game is so short I can’t really say they had time to grow.

I really liked my time with Tears Revolude, even if the game felt on the short side.
Simplicity has its beauty, and this game is a prime example of that.

Rating summary: I also usually get lost on 3D~ish games but this one did not got me lost, so Controls get 5 stars. I liked the story, characters were well written and the cliché does not play against it, so 5 stars as well. And I liked the skills, even if they make the game comically easy.