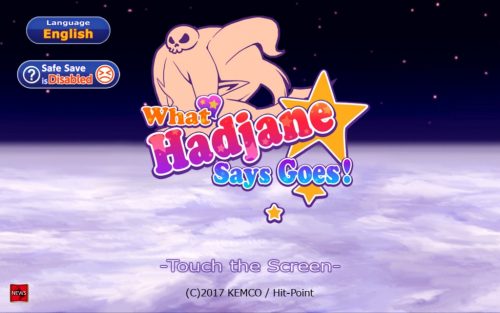 There are 2 reviews for 'What Hadjane Says Goes!'.

A game that needed some polish but worth playing

First time i saw this game i was like “Wow, this is really different from the others kemco games.” then i bought it right away.
Well, first thing that annoyed me was the amount of dialogue during the “story mode”. In this game some important dialogues appears as an option in the game map and you have to select it to start the cutscenes and then proceed to play. I don´t know if they tried to do a visual novel inside this game or they liked the story so much that they tried to extend it even more because it feels like the dialogues takes forever to end, this kinda discouraged me to continuing playing in the start. But after sometime i deleteed my save and started over again, but this time reading every bit of the dialogue.

Well, the story feels like an comedy/slice of life anime, i laughed a lot of times, started to like the story a bit more. Not a super well written story or super funny but enjoyable.
The gameplay is super fun and simple, you just move around while doing some combos and summoning minions and…that´s it. You can activate an auto-play option and collect materials and keys from locked levels while afk.
And the game have a post-game after you beat it with more levels to play (I didn´t played the post-game so, i can´t talk too much about it).

The level up system is kinda different from the other games because you have to use some crystals you get from defeated monsters and using them on your stats. If you upgrade a certain stat four times you level up, that means that you gain four points in a determined stats + the level up bonus. Oh, monsters can be upgraded too.
The game have a lot of monsters to use but at some point you will realize that it´s not worth using most of them, like 90%. The only monsters that are really good to use are the ones you summon using the “tombstones” scattered through the dungeons and some monsters you only find at the end of the game.

Oh and you can also use different styles of scythe and upgrade them by using materials you find in dungeons. I beated this game without a single upgrade, seriously. All i had was a good monster and crystals to upgrade my stas because i think that´s all you need, if you are having too much difficult to beat a stage just grind some crystals, upgrade your stats and you´re good. But if you really want to upgrade every weapon in the game i won´t stop you.

In short, this game is good and worth playing, maybe some changes could make it more enjoyable, but the game have it´s own charm.

An average game that could've been better

What Hadjane Says Goes is an action RPG with some really cool features, but very little challenge. Most of the game is really easy, and it’s made even easier by the “Full Auto” grinding option, whereby all you have to do is enter a level and tap “Full Auto,” then wait for your character to clear the area and reap the rewards.

The graphics are really good, the storyline is just so-so, and the overall difficulty is low. Still, while I wouldn’t call it one of Kemco’s finest, it’s definitely not among the worst games. There are parts of it that I like: you can upgrade and craft new weapons, and you can collect various “minions” in certain levels, and then summon them into battle to do the fighting for you – but I would have liked it a lot more if it had been more challenging.